This feature is in loving memory of a very special dog, Ziggy Hutton. Sadly, Ziggy passed away earlier this year in June, but his humans hope by telling his story that they will help others who find themselves in their situation. 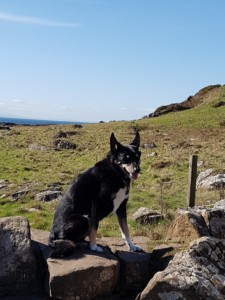 Ziggy was a 10-year-old Tri-Coloured Collie Cross adopted from the Dogs Trust 9 years ago. His behaviour was all Collie despite showing signs of thinking he was human! Ziggy knew how to open doors and when it was time to go out into the garden at the end of the day.

Some of his favourite things included tummy rubs and cuddles and heading along the River Avon with his pals Seve and Harvey. Every toy he received ended up in the garden, some making it into a hole he dug beneath an apple tree! Ziggy used to sneak onto the sofa when he knew no one was around, quickly hopping off when a human appeared with his ears flat and looking rather sheepish.

Ziggy became very sick suddenly last November with a painful back and swollen lymph nodes. After a scan of his spine the neurologist explained that there was wear and tear in a couple of spinal discs which could be easily controlled by pain killers. However, the swollen lymph nodes were more worrying with the normally hungry dog refusing water and food and losing 3kg in weight. A biopsy confirmed the worst that Ziggy had lymphoma – cancer in his lymph nodes.

Ziggy’s humans were unsure about what to do next but following a chat with vet Stuart, who gave them all the different options, decided to take Ziggy to Dick Vet School to discuss the chemotherapy route. It was explained that chemo in dogs is different to humans because the cancer can’t be cured so the dosage is reduced. Chemo aims to keep the cancer in check and therefore, allow dogs to live what time they have left happily. Ziggy had the more aggressive type of lymphoma with a life expectancy of 6 months. The Suttons decided to go ahead with the treatment and say that it was the best decision they have ever made. Despite not being a cheap option, their pet insurance covered much of the treatment.

Ziggy’s health improved after the first dose of chemo and despite coming out of remission several times, the use of different drugs managed to keep the cancer at bay. Ziggy enjoyed a further 8 fabulous months with his humans who describe it as a really special time.